Click for current safety guidelines, restrictions, and the latest news on COVID-19.

Results Found: 5
Button group with nested dropdown
"Ocracoke Through Your Eyes" Vitual A... 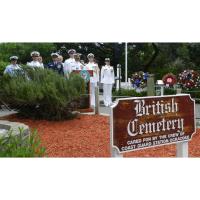 The British Cemetery ceremony will take place Friday, May 7, 2021 at 11am. The ceremony commemorates the sinking of the H.M.T. Bedfordshire off the coast in 1942. Four sailors from the Bedfordshire are buried on Ocracoke, in a small plot of land that is ?forever England.? Representatives from the U. S. Coast Guard, British Royal Navy, and Royal Canadian Navy, as well as Ocracoke School students, participate in the annual ceremony, which includes a reading of the crew list, the playing of bagpipes, and a 21-gun salute. The event is open to all who wish to pay their respects, and brings family members and World War II historians from all over the world to honor these gravesites. This will be the 77th commemoration of four British World War II soldiers buried in the small plot of British land along British Cemetery Road.