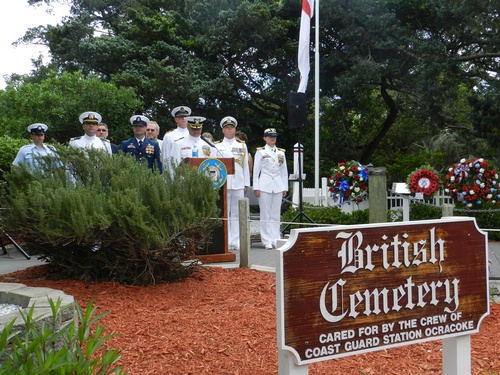 The annual British Cemetery Ceremony takes place at the small cemetery in Ocracoke Village, beautifully landscaped and manicured by the U.S. Coast Guard.

This event is organized by the Friends of the Graveyard of the Atlantic Museum, the Ocracoke community, the U.S. Coast Guard, Coast Guard Auxiliary 16-04, the National Park Service, and the Commonwealth War Graves Commission.

The Atlantic Ocean and East Coast was a vital shipping lane for merchant ships from various nations ferrying supplies in early 1942.

The U.S. Navy had no ships suited for anti-submarine patrol, so the United States accepted the services of the British Royal Navy to guard against German submarines.

In 1942, the Royal Navy sent 24 armed trawlers to the East Coast to aid the U.S. Navy in their anti-submarine efforts.

On May 11, 1942, U-558 fired torpedoes at the HMS Bedfordshire, causing it to sink. All 37 Royal Navy sailors were lost. The bodies of two of the crew were spotted in the surf off Ocracoke Island. Sub-Lieutenant Thomas Cunningham and Ordinary Telegraphist Second Class Craig are buried at the Ocracoke British Cemetery. Two bodies also were found in the ocean north of Ocracoke, and although never identified, were assumed to have come from the Bedfordshire, and were interred alongside their shipmates in the Ocracoke British Cemetery.
Residents and visitors are invited to pay tribute to the sailors from the HMS Bedfordshire.  A reception follows the ceremony.